Last Friday evening the Student Leadership Council hosted a “Snowball” Dance for junior and senior high students. The students had a great time! They would like to thank Mr. McCarthy for providing the music and their chaperones Mrs. King, Mr. Drew, Ms. Bishop and Mme. Howlett. 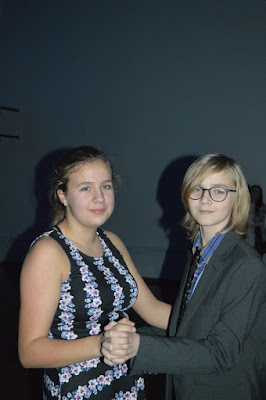 On Sunday evening there was a meeting for students in grades five and up who are interested in traveling to St. Pierre in May.
Mrs. Passmoor’s grade four class won a pizza party as part of the annual food bank for collecting the most food items per student. Constable Shawn Park visited them to deliver the pizza. The class would like to thank Louis Gee’s for donating the pizza!
On Tuesday we hosted a goodbye party for our Brazilian exchange students. In addition to party snacks and treats, all classes visited to present the students with cards and say goodbye.
The grade four students enjoyed their second lesson in cross country skiing this week at Blow Me Down Ski Park.
The grade four English and French Immersion classes participated in a presentation on anti-Smoking presented by Public Health nursing students Charlotte Wolfrey, Melissa Kennedy and Nicole Targett.
The kindergarten English and French Immersion classes went on their annual western Regional Memorial Hospital Foundation orientation session.
The Grade 6 Girls’ Basketball Team is participating in a tournament this weekend at St. Gerard’s School.

Congratulations to Madeline Murphy who received a certificate from Tae Kwon Do for Awesome Back Front Kick this week.

The junior kindergarten classes are enjoying the sunshine and playing outside early in the week. They are learning about winter and the letters “c” and “d”. The students welcome Lexie Hedderson to their class this week.
Mrs. Hodder’s Kindergarten English class enjoyed their hospital orientation field trip at Western Memorial Regional Hospital. This week they are working on the letter “p” and positional words in math.
Mme. Baugé’s Kindergarten French Immersion class enjoyed discovering patterns in nature. They looked at zebras, snakes, and butterfly patterns. They worked hard on writing their upper case and lower case “f” this week.
Mrs. George’s grade one English class is learning about rights and responsibilities in social studies. They are learning about what life was like when Jesus grew up in their religion class.
Mme. Ryan’s grade one French Immersion class began a new unit in math. They are learning about measurement. They made a height chart in their classroom. The students drew and painted cardinals this week. They are beautiful.
Ms. Kane’s grade two English class wrote the mayor in support of a plastic bag ban in our city. Their letter will be on the agenda of the February 6th Public Council meeting. Our students, families, and staff are welcome to attend.
Mme. Howlett’s grade two French Immersion class has been learning about sequencing and step procedure by giving instructions on how to make hot chocolate. They used their adjectives to describe hot chocolate and surveyed the class to graph about their preferences.
Mme. Moss’ grade three, four, five and six French Immersion class enjoyed making delicious hot chocolate and then describing it in French. The grade three and four students are starting a unit on poetry and a preparing for a math quiz. The grade five and six students are preparing to put off their production of “Telebacon” a French screenplay that they wrote, revised, directed and starred in!
Mrs. Bishop’s grade three class have started their first novel study. They are reading “Pippi Longstocking” and are excited to see what quirky things Pippi will get into. They are still looking daily at their Little Green Thumbs Garden and things are growing nicely!
Mrs. Passmoor’s grade four class had a very busy week. They enjoyed a talk on anti-smoking from the Public Health nurse, a pizza party for winning the food bank contest, and they continued their cross country skiing lessons. 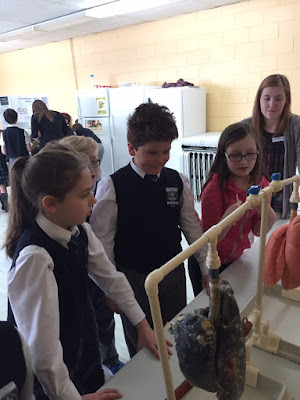 Mrs. McCarthy’s grade five and six class is finishing up their novel studies this week in language arts and celebrating by watching the movie adaptations. The grade five students had their chocolate taste test. Their favourite chocolate bar was Hersey followed closely by Lindt. 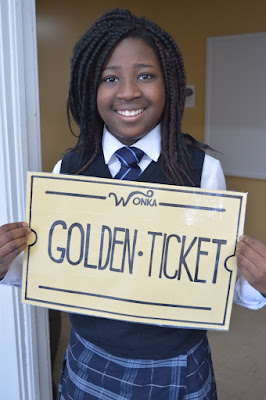 
Thursday is National Sweater Day.
Posted by IHMS at 4:44 AM

On Monday our students were treated to a magic show! Father Roache visited the classrooms in the school and performed magic tricks to the amazement of all the students and teachers. On Thursday, we celebrated a special Mass with Father Roache during his visit to Corner Brook.
Our school public health nurse, Ms. Lynette Christopher, along with her nursing student, Charlotte Wolfrey, presented to our grade four and five classes about looking after our own health.

The annual Cross Country Skiing Program at Blow Me Down will start next week for the students in grade four.

The grade six girls’ basketball team will compete in their first tournament of the year. They are playing in the Tiny Titans Tournament hosted at Corner Brook Regional High. The first game takes place on Friday at 5:00 pm.


Stars of the Week

Congratulations to Madeline Murphy who received a certificate for Awesome Axe Kick from Tae Kwon Do this past week.

The junior kindergarten classes are making winter theme crafts. They are learning the letter “B” and practicing doing their own magic tricks!

Mrs. Hodder’s Kindergarten English class is using Playdoh to make shapes in math. They are working on the letter “P”. The students really enjoyed the magic show on Monday.

Mme. Baugé’s Kindergarten French Immersion class is learning about root cellars, including how they are made and why. The children are also discovering a new letter “J” and French words related to weather.

Mrs. George’s grade one English class is sampling different breads from around the world in social studies. They are doing subtraction stories in math class.

Mme. Ryan’s grade one French Immersion class really enjoyed the magic show on Monday. They are busy learning new French vocabulary and enjoying the snow outside.

Ms. Kane’s grade two English class had a great week! The students would like to welcome Gabriella Lawrence to their class. The students are learning about polar bears. Did you know that their hair is transparent and the skin underneath is black?

Mme. Howlett’s grade two French Immersion class has been practicing their math skills when using money. They are using games to practice their French sentence building.

Mme. Moss’ grade three, four, five and six French Immersion class really enjoyed the magic show on Monday. This week they welcomed a new grade six student, Max Pittman, to their class. The grade three and four students are interviewing people who moved to Canada about why they decided to emigrate. The grade five and six students are creating their own utopian societies based on what they learned about government structures and laws.

Mrs. Passmoor’s grade four class was excited to take part in the Scripps National Spelling Bee in their class. It was their first time ever participating in a bee and it was very exciting to practice the challenging words. Stay tuned for the class winners next week! The students would like to welcome Destinee Lawrence to their class.

Mrs. McCarthy’s grade five and six class is enjoying their STEM project in science class with Mme. Moss and Mr. Ryley. The students are learning through problem solving.  The girls’ basketball team will participate in their first tournament this weekend. On Monday the grade six students had a race to determine who could run the fastest. After many races the final winner and “Fastest Kid in the Sixth Grade” is Clare Coleman.

Mr. Drew Nadon’s junior high to level three class went sliding at Margaret Bowater Park on Wednesday as part of their Enrichment class. They are busy planning a dance for junior and senior high students on January 20th. The students are also preparing for their first midterm exam next week. 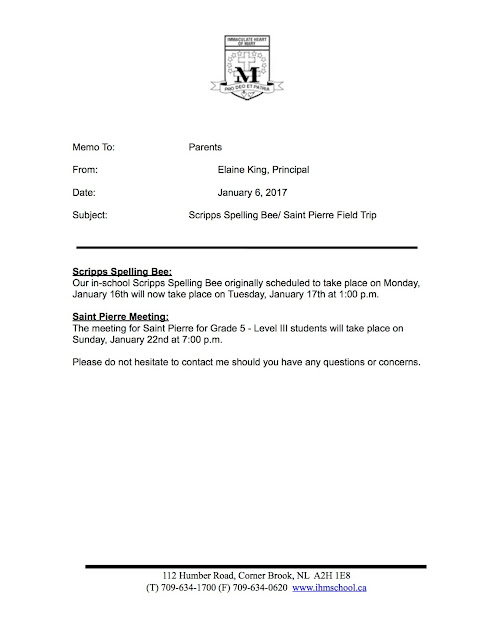 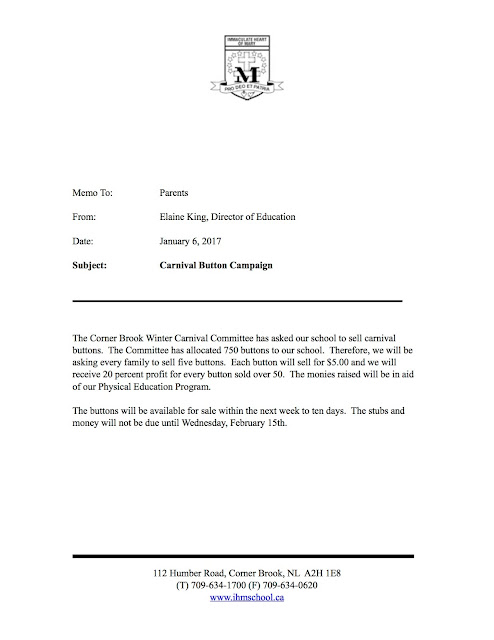 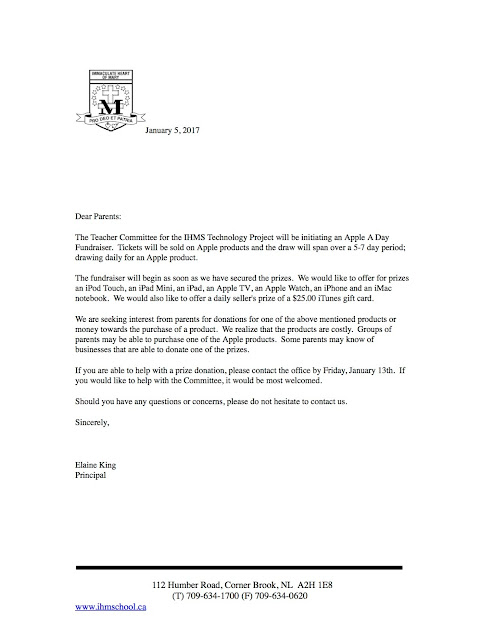 We would like to welcome everyone back from Christmas holidays. Happy New Year, everyone!
Before the break our school enjoyed a skating part at the Corner Brook Civic Centre hosted by the Knights of Columbus. We had an hour of skating and a snack afterwards. We would like to thank the Knights of Columbus for donating the ice time and snacks. Everyone had a great time! 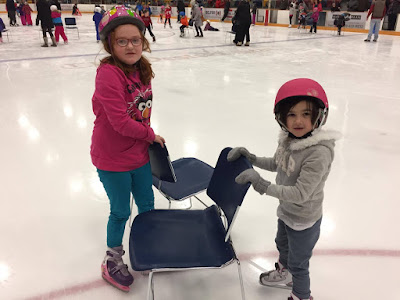 Jamie Robertson (left) and Katy Hancock (right) enjoy some practice skating at the school skating event before the Christmas holidays. The skating party was hosted by the Knights of Columbus. 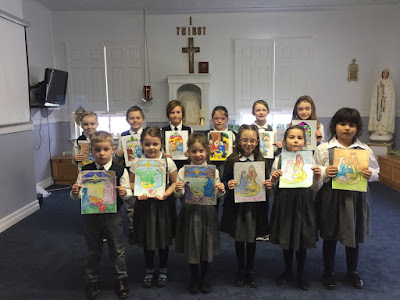 Congratulations to Landon Harvieux who won a colouring contest over the Christmas break.
Congratulations to Arista White who has received notification that her poem was selected to be printed in a publication called by Young Writers called “The Heart of Solstice” and her poem is being considered for an award to be announced this June.

The junior kindergarten classes are learning about New Years and making resolutions for their classroom.
Mrs. Hodder’s Kindergarten English class is learning about what the New Year means. They are also completing Heritage posters. They are working on the letter “m”.
Mme. Baugé’s Kindergarten French Immersion class is learning the letter “j” like “Janvier” and are discovering how Fireworks are made.
Mrs. George’s grade one English class is writing about their resolutions and doing some New Year’s crafts. They would like to congratulate Makayla for placing first in the Knights of Columbus Keep Christ in Christmas Colouring Contest.
Mme. Ryan’s grade one French Immersion class is excited to be back to school. They had a lot of fun sharing their stories and toys. They have been using manipulatives to estimate for addition and subtraction. They have been talking about winter vocabulary and doing winter activities.
Ms. Kane’s grade two English class is excited and happy to have Isaiah Coleman re-joining their class. The students are excited to share information about their Christmas vacations.
Mme. Howlett’s grade two French Immersion class had a wonderful break and are ready to get back to work and learning. In the next few weeks they are going to be working on their French vocabulary and building their math skills.
Mme. Moss’ grade three, four, five and six French Immersion class is working on a poetry unit in French. The class is glad to be back to school after the Christmas break.
Mrs. Bishop’s grade three class is finishing their Heritage Places Posters this week. They were surprised to see how their plants grew over the Christmas break. They are having a show and tell on Friday where the students will have an opportunity to share something exciting that they received over Christmas.
Mrs. Passmoor’s grade four class is excited to be starting their cross country skiing program next week. The students are preparing for their in class Scripps Spelling Bee next week!
Mrs. McCarthy’s grade five and six class is excited to be back with their classmates after the Christmas break. Everyone enjoyed their holidays. The students are preparing for the in class Scripps Spelling Bee next week.
Mr. Drew Nadon’s junior high to level three class is busy preparing for their midterm exams. The Brazilian students are in the last month of their exchange program in Canada. 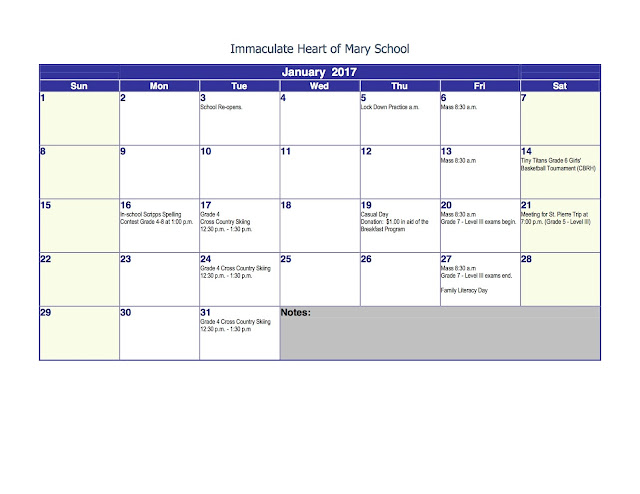