By:  Max Pittman and Trinity Rouse 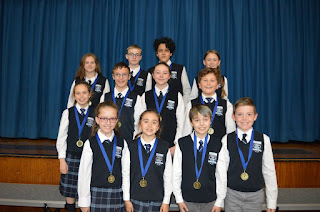 Last Sunday morning many of our grade one and two students celebrated their first Holy Communion. We would like to congratulate Isaiah Coleman, Noah Conté, Liam Couture, Jacob Cull, Uriah Cull, Rotém Phillips-Grobbelaar, Meteghan Kane, Logan McCarthy, Robert Morrissey, Hala Parsons, Brooklynn Pittman, Jamie White-Robertson, Noah Wall, and Ryder Walsh on receiving the sacrament of Holy Communion for the very first time. Following the mass the students celebrated with their families at a small reception.  They would also like to thank Father Terry, Mrs. Jackie George, Mrs. Yvonne Coleman, and Mrs. Marjorie Deckert for their support during the preparation and celebration.

This week our school was very busy preparing and performing in the musical production of “The Trials of Alice in Wonderland”. The production included all students in our school and a special guest appearance of Mr. Ian Locke. The musical was directed by Mrs. Lilana Bishop, Mme. Jessica Howlett, and Dr. Jennifer Matthews. We would like to thank Mr. Scott Reynolds, Dulux Paints, Mrs. Sylvia Phillips, Mrs. Michelle Pittman, Ms. Laura Edwards and Mrs. Jane Reagh for their support in making the show possible. Everyone had a great time and the performance was spectacular.

On Thursday morning we held a special celebration to honour Hala Parsons who is the provincial winner in the World Ocean’s Day Primary Poster Contest. Hala was presented with her prize package during a school assembly. 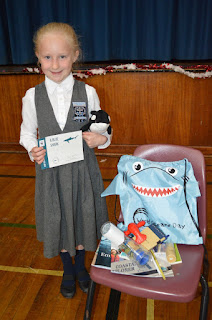 Hala Parsons, a grade two student at Immaculate Heart of Mary School was the provincial winner in the World Ocean Day Primary Poster Contest. Hala is pictured here with her prize pack which included several books, games, a water bottle, a toy killer whale, and an adoption certificate for an endangered blue shark. World Ocean Day is celebrated annually on June 8. 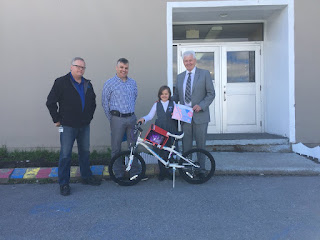 This evening our school will host its first high school graduation ceremony to honour our graduate, Arista White. The ceremony will begin with a mass at 5:00 at All Hallows.

We would like to congratulate our students who performed in the Graham Academy’s productions “A Year with Frog and Toad” and “Jack and the Queen Stalk”. Simon Boitsefski, Grace Brake Higgins, Keira Clarke, Heather Cooper, Clare Coleman, Luke Coleman, Carly Johannesen, Candance Johannesen, Alister MacDonnell, Ella Rashleigh, and Lily Smallwood all performed in the year end production. Congratulations!

Congratulations to Rebecca Janes who is the recipient of the Most Dedicated Skater Award. This was awarded at the annual Silver Blades Skating Banquet.

Congratulations to Jenna Cammie who passed some tests at the Figure Skating Test Day this past weekend.

Congratulations to Lysea Ngania who received her yellow stripe belt in Tae Kwon Do this past week.

The junior kindergarten classes really enjoyed being part of the school musical. The students were dressed up as flamingos for the show. They sang the Muppet theme song to open the show. The students are learning about Father’s Day and preparing special gifts.

Mrs. Hodder’s Kindergarten English class had an excellent performance on Tuesday evening at the school musical. The students are preparing for the end of year art show. 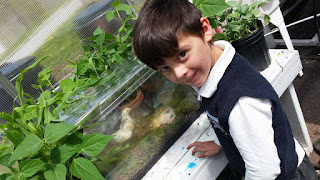 Hunter Olmstead, a kindergarten English student, spends some time visiting with some baby chicks in the school greenhouse this week.

Mme. Baugé’s Kindergarten French Immersion class learned about flamingos this week. In science they are discovering that some snails and other species are not native to Newfoundland and Labrador.

Mrs. George’s grade one English class is learning in science class about how people and animals grow. They finished their last math unit. They had a terrific time at the school musical this week. They would like to wish Bryant a very happy birthday today!

Mme. Ryan’s grade one French Immersion class enjoyed the musical on Tuesday evening. They are busy finishing off their units in math and science. The students are looking forward to summer vacation in a few weeks.

Ms. Kane’s grade two English class is beginning a new unit in science on motion. They will be doing much exploration inside and outside the school.

Mme. Howlett’s grade two French Immersion class had a lot of fun participating in the musical. Everyone did a great job! They are starting to learn summer vocabulary and are getting excited for summer vacation.

Mme. Moss’ grade three, four, five and six French Immersion class is riding the energy and momentum from the musical into the last few weeks of school. They are diving right into a class project on measurement and are wrapping up their French unit by exploring and illustrating French idioms.

Mrs. Bishop’s grade three class had an eventful week preparing and performing the school musical. They tested and improved their drawing skills as they class drew and painted portraits of characters in the musical. The class embraced the challenge as these portraits were not easy to do.

Mrs. Passmoor’s grade four class is focusing on long division and adverbs this week. They really enjoyed the science fair on Friday and the musical on Tuesday evening.

Mrs. McCarthy’s grade five and six class would like to congratulate the whole school on another awesome musical performance. The grade six students finished off their video challenge for the Plastic Grab Bag Challenge. The grade five students are reading the novel “Kensuke’s Kingdom”. All the students are looking forward to summer vacation!