By: Angelina Burton, Charlotte Mercier, Cole Lyver, Luke Coleman, and Noah Colbourne
This week we celebrated Valentine’s Day with class parties and a valentine exchange. The student Leadership Council held a carnation sale. Flowers were delivered by Colemans and distributed on Valentine’s Day.
Friday is National Flag Day of Canada. Our whole school joined in a special assembly in our school gym and a singing of O’Canada in both official languages.
Class News
The junior kindergarten classes are exploring kindness and celebrating Valentine’s Day. They are looking forward to the 100th day of school next week!
Ms. Cornick’s Kindergarten class is starting word families this week and looking at C-V-C (consonant Vowel Consonant) words.
Mrs. George’s grade one English class is enjoying all their Valentine activities this week. They are comparing masses in math class. In religion they are making story cubes. They would like to wish Mary Jay a happy 7th birthday!
Mme. Ryan’s grade two and three French Immersion class collected items for our local food bank. They are very proud of their project and our school community for their generosity. They have also been working on measurement in math which has been a fun hands on learning class all week.
Ms. Bursey’s grade two English class is learning about movements of living things in science and learning to add more descriptive words in their sentences. In math, they are learning about measurement.
Mme. King’s grade four, five and six French Immersion class really enjoyed their visit with the students from St. Pierre last Friday. They enjoyed their presentations and cultural activities. This week they did Valentine’s Day activities. All classes enjoyed multiplication activities.
Ms. Williams’ grade three class learned about force and how force can be used to speed up, slow down, move, or change the shape of an object. In art and health, students created posters for “Say Yes to Friendship” poster contest as February is Violence Prevention Month.
Mrs. Hink’s grade four class is well underway with their speech writing for the Elementary Speak-Off. They have some very interesting topics and are learning a lot. In math they are having fun with multiplication.
Mr. Ryley’s grade five class is moving on to stage three of their STEM project. They worked very hard on writing speeches this week for the Elementary Speak-Off.
Mrs. McCarthy’s grade six class is enjoying writing speeches in language arts. They enjoyed their class Valentine’s Day party on Thursday.
Mr. Drew Nadon’s grade seven and eight class is continuing to work on their fraction unit. In social studies they are exploring life in the trenches during World War One.
Mr. Hancock’s grade nine to level three class welcomed six new Brazilian exchange students to their class and Georgia MacDonald. They are: Guilherme Araujo Rocha, Matson Viera Menezes, Ludmyla Matos Alencar, Mateus Chagas Cavalcante, Inglid Akla Rocha Silva, and Nicole Sthéfanne Monteiro de Araujo Lourenco. Biology 2201 students have started learning about genetics. Chemistry 2202 students are learning about solutions and concentration. 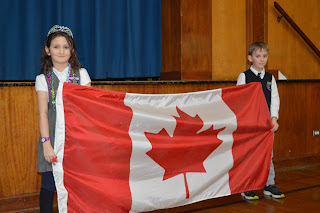 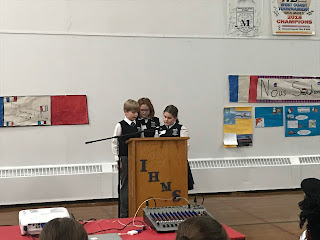 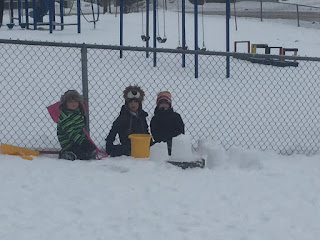 Junior kindergarten students, Ben Oxford, Blake McMackin and Oliver Douglas, enjoy some time outside in the snow this week.
Posted by IHMS at 3:33 AM

By: James Lao, Destinee Lawrence, Brooke Watton, Leah Lainey, Oscar George, and Aaron Payne
Grade four students are continuing their cross country skiing program at Blow Me Down.
The Student Leadership Council is having a pre-sale of carnations for Valentine’s Day. Students can pre-order the flowers for $3. The flowers will be delivered on February 14th.
Today we are hosting a group of grade five and six students from St. Pierre. They will have lunch with our grade five and six students and then share in cultural activities. Our students are eagerly looking forward to this exchange.
Girls’ Basketball team is participating in the Western Regional Provincials this weekend at St. Peter’s Academy. The first game is today against Eastside Elementary.
Stars of the Week
Congratulations to our grade 2 and 3 French Immersion students on their display of compassion and leadership in organizing a school food drive to help our community.
Class News
The junior kindergarten classes are learning about Valentine’s Day and acts of kindness.
Ms. Cornick’s Kindergarten class is learning about the number seven in math and the sight word “come”. They are wishing their teacher a speedy recovery.
Mrs. George’s grade one English class is comparing surface areas in math class. They are learning about our natural resources in social studies and writing what love means to them in language arts. The star of the week is Owen.
Mme. Ryan’s grade two and three French Immersion class has initiated a project to help the food bank. Last week they thought about what they could do to help our community after the Food Bank fire. They made posters and are promoting for every family to bring in food for a special donation. They will be certainly leaders in their community with their forward thinking.
Ms. Bursey’s grade two English class is learning about nouns and verbs this week. They are finishing matter in science and technology in social studies.
Mme. King’s grade four, five and six French Immersion class had a lot of fun this week doing their first “math bee”. The grade four and five students began their multiplication unit and the grade six students had a quiz on order of operations. In French, they have been busy preparing for their visit luncheon on Friday and the afternoon cultural activities with the students from St. Pierre. They were excited to celebrate Israela’s birthday this week.
Ms. Williams’ grade three class read a story called “The Time Capsule”. They began a writing project on what items they would include in their own time capsules and why each item is important to include. In French, they are learning vocabulary relating to birthdays through different fun activities and games.
Mrs. Hink’s grade four class had their third cross country skiing lessons. They have started their final assignment on light in science. They are enjoying learning about multiplication in math.
Mr. Ryley’s grade five class is learning about medieval times. They are continuing their STEM project in science and are enjoying reading “Charlie and the Chocolate Factory”.
Mrs. McCarthy’s grade six class is reading a new book called “Bridge to Terabithia”. In science they are learning about electricity.
Mr. Drew Nadon’s grade seven and eight class is working on a unit on fractions. In social studies they are continuing their simulation on WW1. Students are excited to start their popsicle stick model bridges in Enrichment. They would like to welcome Faith and Jennifer O’Neil to their homeroom this week.
Mr. Hancock’s grade nine to level three class is happy to be finished with their midterm exams. Science 1206 students have begun their Physics unit. Math 2201 students are learning about applying quadratic functions.
Coming Up
February 14th is Valentine’s Day.
February 15th will be the 100th day of school! We will celebrate with a special theme day. 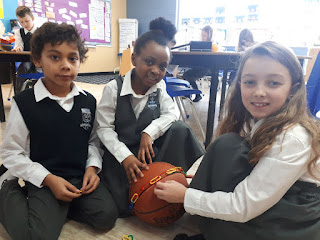 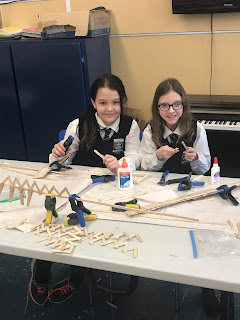 Grade seven students, Isabelle Mercier (right) and Kira McCarthy (left) are busy constructing Popsicle stick bridges for the National Geosciences and Engineering Month contest coming up in March.
Posted by IHMS at 3:38 AM

By: Lily Smallwood, CarlyRae Mouland, Carter Bromley, Jacob Cull, and Erica Kennedy
The grade four boys’ and girls’ basketball teams played in a fun tournament last weekend. There were no scores kept during the games.
The junior and senior high exams continued this week. They will conclude on Monday.
The grade four class continued their cross country skiing lessons at Blow Me Down this week with their second week of skiing. The students were excited to get out and continue their program, despite the cold weather.
On Thursday, we held a fundraiser for the Kids Eat Smart Foundation and our school breakfast program. All donations from our families will be matched by the Kids Eat Smart Foundation.
The grade six boys’ basketball team played a game on Monday and Wednesday afternoon against J.J. Curling. They are participating in a tournament this weekend hosted in Stephenville.
We would like to thank the Knights of Columbus for their food donations to the Breakfast Program this week.
Stars of the Week
Congratulations to Sam Gaulton and Imogen Ash who made stuffed cats in afterschool program sewing club.
We would like to congratulate Jessica Galliott, an IHMS parent and our greenhouse facilitator,  on the birth of her new baby girl, Emily and little sister to grade two student, Carrie Hoskins.
Class News
The junior kindergarten classes have been exploring arctic animal footprints, sounds, and how many hibernate.
Ms. Cornick’s Kindergarten class is learning to read more and more each day. Way to go!
Mrs. George’s grade one English class is learning all about groundhogs today. Did you know that they are also known as woodchucks and whistle pigs? In social studies they are learning about how communities depend on each other for the exchange of goods and services.
Mme. Ryan’s grade two and three French Immersion class have begun a unit on measurement. They are comparing length, height, weight, and capacity. They are also discussing friendships and differences.
Ms. Bursey’s grade two English class is learning about addition doubles, and finishing off technology and matter units.
Mme. King’s grade four, five and six French Immersion class would like to congratulate Brooklyn on her fine performance at the grade 4 girls’ basketball tournament this past weekend. In French language arts the students did a great job on their poetry writing and are very excited to welcome students from St. Pierre next week. In math, the grade four and five students are finished their data management unit. The grade 6’s are excelling at order of operations.
Ms. Williams’ grade three class had a lot of fun reviewing their adding and subtracting strategies by playing an adding game called “Tic Tac Add”. They also began estimating differences and learning strategies for subtracting two digit numbers. In language art they are learning the rules for placing commas in sentences.
Mrs. Hink’s grade four class is happy to be participating in the Cross Country Skiing program at Blow Me Down. They are learning about reaching goals by reading “To the Top of Everest”. It is an exciting time.
Mr. Ryley’s grade five class is excited for their classroom simulation on the feudal system in social studies. In language arts they are starting a novel study on Charlie and the Chocolate Factory.
Mrs. McCarthy’s grade six class is reading a story about a young Jewish boy who was in hiding during the second World War. In band they are preparing their pieces for the upcoming Rotary Music Festival.
Mr. Drew Nadon’s grade seven and eight class wrote their math exams on Wednesday. In social studies they are working on their World War One simulation.
Mr. Hancock’s grade nine to level three class continued their midterm exams this week. In language arts they are preparing for their Poetry in Voice presentations next week.
Coming Up


Next week we will welcome a group of visiting students from St. Pierre to our school. 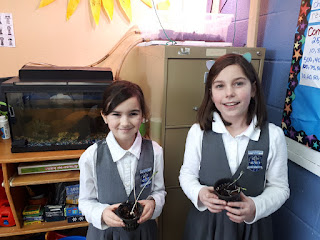 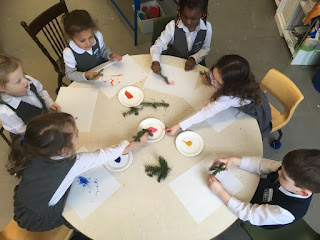