By: Lily Smallwood, CarlyRae Mouland, Carter Bromley, Jacob Cull, Erica Kennedy
On Thursday we held a banner raising ceremony for the Girls’ Grade 6 Soccer Team and the Boys’ Grade 6 Soccer Team to celebrate their gold medal wins this season.
Good luck to our students attending the Regional Heritage Fair this Saturday at Corner Brook Intermediate. We have Jack Watton, Ava Hodder, Israela Ngania, Luke Coleman, Lily Smallwood, Kate Murphy, Leah Lainey, Erica Kennedy, candace Johannesen, Brooke Watton, Gabriel Rowsell, Fatima Alkhalil, Carly Johannesen, Reyd Ward, and Rebecca Janes representing our school.
The teachers took a narrow victory with a score of 5-4 in the Student vs Teacher soccer game on Friday morning.
The students will play their parents in a game on Sunday afternoon.
Class News
The junior kindergarten classes are enjoying the new changes to their playgrounds. They are continuing to practice for their part in the spring musical. They have started some gardening inside and outside the classroom.
Ms. Cornick’s Kindergarten class is learning new sight words “won’t” and “and”. They are learning about salmon and preparing posters for the Salmon Environment Art Challenge.
Mrs. George’s grade one English class is learning about how interactions between communities changed over time in social studies. They are starting to get their experiments ready for the science fair next month.
Mme. Ryan’s grade two and three French Immersion class is researching planets, magnet STEM activities, and planting seeds in the greenhouse. They are finishing their colour wheel activity.
Ms. Bursey’s grade two English class is learning about caring for our environment and tallying data in math. The students are excited about the teacher vs students soccer game.
Mme. King’s grade four, five and six French Immersion class is looking forward to the student vs teacher soccer game. The grade five and six students are studying different types of fractions in math. The grade fours are doing word problems. All students are working on essay writing in French.
Ms. Williams’ grade three class made a “gravity defying” device in science class. In art the students used acrylic paints on canvasses to make beautiful May flowers.
Mrs. Hinks’ grade four class is busy getting ready for the upcoming science fair. The class is having sun in art class working with watercolour painting techniques.
Mr. Ryley’s grade five class is writing cause and effect reports in language arts class. They enjoyed the teacher vs student soccer game on Friday morning.
Mrs. McCarthy’s grade six class is learning about angles in math class. In language arts they are discussing problems they see that face our communities and society. They will think of ways these problems can be solved and prepare a problem and solution report to share with their classmates.
Mr. Drew Nadon’s grade seven and eight class is working on their geometry unit. In social studies they are almost finished learning about the Great Depression.
Mr. Hancock’s grade nine to level three class has begun preparing for exams. Math 3201 students are learning about sine and cosine functions. Science 1206 students are learning about global weather patterns.
Coming Up 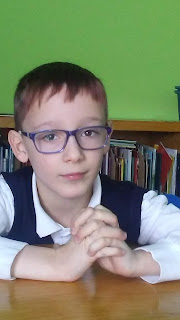 Liam Gaulton during the Light and Power Energy Conservation presentation
Posted by IHMS at 3:39 AM

By: Grace Brake Higgins, Israela Ngania, Ava Hodder, Maitham Al-Zubaidy, Molly George, Kate Murphy
IHMS students in grades 4-12 took part in the Civix Student Vote last Thursday for the Provincial Election. Our students elected Liberal Candidate, Brian Dicks; with Independent candidate, Eddie Joyce a close second.
On Thursday morning we held a Pep rally for Yasmin Alkahalil who is travelling to the National Chess tournament in Vancouver, British Columbia.
This weekend is the a long weekend for the Victoria Day holiday.
Our Grade 6 Girls’ soccer team won gold at the Sacred Heart Indoor Soccer Tournament this past weekend. We would like to thank the coaches Mr. Drew Nadon, Mr. Ryley Nadon, and Ms. Alteen for working with the team.
Stars of the Week
Congratulations to Yasmin Alkahlil who is travelling to the National Chess Tournament in Vancouver this weekend.
Class News
The junior kindergarten classes are enjoying and playing in their playground. They are learning the music for the school’s upcoming production of the Lion King Junior. They are enjoying the spring weather.
Ms. Cornick’s Kindergarten class is learning about floods, blizzards, and all kinds of extreme weather as well as new sight words. They are loving the sunny days.
Mrs. George’s grade one English class has started their project ‘Wonderful Me”. Each student will write a nice thing about his or her friends and make them into books to take home. They are enjoying their subtraction stories in math class.
Mme. Ryan’s grade two and three French Immersion class has just started a research project about space. Students are on their jot note and gathering info stages. They are also experimenting with magnets.
Ms. Bursey’s grade two English class is doing an author study on Robert Munsch. In science they are learning about animal life cycles.
Mme. King’s grade four, five and six French Immersion class is writing menu’s for their restaurant in French class. Their spelling test consisted of vocabulary associated with a restaurant. In math, they grade fours are working hard on long division. In grade five math the topic is equivalent fractions, while the grade six’s are learning about proper and improper fractions. The class would like to congratulate Candace and Israela on their soccer championship.
Ms. Williams’ grade three class had a great week. They are enjoying the beautiful weather and finishing up the last of their units in math and science. This week their caterpillars arrived!
Mrs. Hinks’ grade four class is excited about doing their science experiment this week. They are continuing with long division and working on their novel study.
Mr. Ryley’s grade five class is working on their science fair projects. In social studies they are finishing their talking sticks.
Mrs. McCarthy’s grade six class was excited to take part in the Civix Student Vote this Thursday for the Provincial Election. They learned about each of the political parties in our riding and made a choice about who they would like to represent them.
Mr. Drew Nadon’s grade seven and eight class is learning about the great depression in social studies. The grade eight students completed the PCAP Math assessment on Wednesday.
Mr. Hancock’s grade nine to level three class is working on their end of the school year units. Chemistry 2202 students are learning about organic chemistry. Science 1206 is learning about weather. The grade nine students are preparing for the science fair.
Coming Up
Junior kindergarten and kindergarten orientation sessions will go ahead on May 29th.
First Holy Communion is on June 2nd at 10:30 at All Hallows. 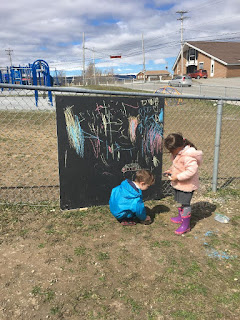 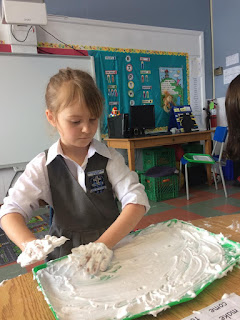 Sanna Joro prepares sight word shaving cream board
Posted by IHMS at 3:37 AM