By: Grace Brake-Higgins, Israela Ngania, Ava Hodder, Maitham Al-Zubaidy, and Molly George
On Monday, Mrs. George’s class lit the first Advent candle on our Advent wreath. Abigail Benoit was the star, Nate Smallwood played Joseph and Lexi Wight played Mary, while the remainder of the class told the story.
On Thursday night we held our Christmas concert. The theme this year was “T’was the Night Before Christmas”. We would like to thank Mrs. Benyon-martinec, our musical director; Ms. Dianna Alteen, our band conductor; Thomas Moerschell, our pianist; Mr. Ron Hancock, our sound technician; Mr. Bryan McCarthy, our videographer; and Mr. Peter MacDonald our photographer. What a show it was! Congratulations to all students and staff on an amazing show.
The Student Leadership Council kicked off the twelve days of Christmas celebration with a door decorating contest. All classes are participating in the friendly competition.
We are collecting for our annual Christmas giving. Each class is collecting items for Stockings for Seniors, Fire Fighters Toy Drive, and allergy friendly food drive.
This Saturday IHMS is hosting a Winter Wonderland Craft Fair from 10-4 pm. Admission is $1 with kids under 12 free. There will be more than 40 vendors on site, a BBQ, face painting, a silent auction, a live auction at 1:00 pm, and Santa photos from 2-4 pm for $5. Elf Day Camp is also available for only $2 an hour. Drop off your littlest elves while you shop!
Stars of the Week
Congratulations to our students on a fantastic Christmas concert. Lily Smallwood, Luke Coleman, Olivia Brinston, Layla Radwan, Keira Clarke, Grace Brake-Higgins, Maisa Freitas, and CarlyRae Mouland all performed as soloists in the show.
Congratulations to Mark Janes’ hockey team who won silver medals in an Atom Tournament in Stephenville last weekend.
Class News
The junior kindergarten classes had a great time at the Christmas concert last evening. This week they made some special Christmas crafts.
Mrs. Cornick’s Kindergarten class is learning all kinds of sight words and they have planted seeds in their Little Green Thumbs Garden.
Mrs. George’s grade one English class is learning about Advent and the true meaning of Christmas. They were very excited to light the first candle on the Advent wreath this week. They are writing friendly letters to Santa. The star of the week is Lexi.
Mme. Ryan’s grade two and three French Immersion class had a very busy week getting ready for the concert. They have been working on some Christmas writing activities including story writing. In art class they worked on decorations for their door.
Ms. Bursey’s grade two English class is practicing writing Christmas sentences this week. They are learning about liquids and gases in science class.
Mme. King’s grade four, five and six French Immersion class presented their “publicitaire” presentations this week and are now creating a video about our school. They are very excited about it. They had a great time performing in the Christmas concert this week and decorating their classroom door. They would like to congratulate Israela Ngania who was the choreographer for the dance number in the concert.
Ms. Williams’ grade three class learned about the rules of capitalization this week.  They learned about writing thank you letters and began writing their own. In social studies they did oral presentations on their persuasive paragraphs.
Mrs. Hink’s grade four class enjoyed playing pattern games in math after they finished the unit in math. They are hard at work preparing for the in-class Scripps Spelling Bee.
Mr. Ryley’s grade five class is excited to start their Christmas STEM activities. They really enjoyed using their imagination to create a Christmas scene with Legos. Their creations were on display at the Christmas concert.
Mrs. McCarthy’s grade six class finished their heritage foundation posters this week. The students enjoyed decorating the classroom door and turning themselves into an Elf on the Shelf to display on the door.
Mr. Drew Nadon’s grade seven and eight class have been working on their data management units. They have been exploring the idea of micro representing data.
Mr. Hancock’s grade nine to level three class prepared for the Christmas concert. Math 3201 students are learning about rational expressions. Math 2201 students have begun quadratic functions.
Coming Up
We will light the second candle on our Advent wreath n Monday.


Santa will visit for photos on the 13th. 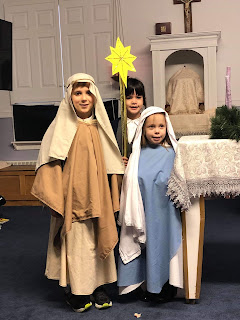 Mrs. George's grade one class lit the first candle on our school Advent wreath. Pictured here are Abigail Benoit as the star, Nate Smallwood as Joseph, and Lexi Wight as Mary. 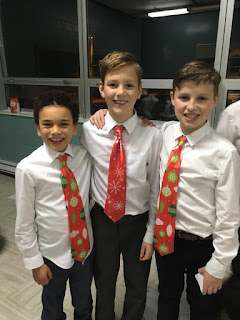 By: Candace Johannesen, Sommer Lawrence, Jake Morey, Alyssa Power, Gabe Rowsell
Our junior kindergarten classes continued their Helping Hands project this week. They are collecting gently used warm winter clothing for all ages.
We would like to thank the Knights of Columbus for sponsoring a merchandise bingo and a 50/50 draw to benefit our school gym. The initiatives raised $5,000! Thank you to the IHMS community for supporting this project. The winner of the 50/50 draw was Jody Sheppard with ticket #3906.
On Wednesday of this week, we celebrated the Divine Mercy with Mrs. Coleman and members of the school prayer group.
We would like to congratulate our grade six to nine students who participated in the Intermediate Skills Challenge last weekend. Our Lego Robotics Team, Space Dawgs, consisting of Molly George, Candace Johannesen, Erica Kennedy, Leah Lainey, Charlotte Mercier, Jack Richardson and Brooke Watton won the Project Innovative Solution Award. They also placed first in the Overall Project Category for Robotics. Our Lego Robotics Team, Space Rangers, consisting of Maitham Al-Zubaidy, Jacob Cull, Destinee Lawrence, Kate Murphy, Aaron Payne, Alyssa Power, Gabe Rowsell, Nikola Verbiski, Aaron White and Graham Zilkowsky placed first in the Robot Performance Category. They were also silver medalists in the Overall Robotics Category; placing second provincially out of seventeen teams.
Additionally, Jenna Cammie and Isabelle Mercier won a bronze medal in the IT Scavenger Hunt Category, Fatima Alkahlil and Keira Clarke were bronze medalists in TV Video Production and Emily Payne and Mathew Penney won a silver medal in Wind Turbine.
Stars of the Week
Congratulations to Robert Morrissey who won a silver medal at the Atom Hockey Tournament this weekend.
Class News
The junior kindergarten classes welcomed a new friend, Lucas Butt, to their class this week. They are learning about the meaning of Christmas and making Christmas crafts.
Ms. Cornick’s Kindergarten class is learning about the number “5” and the sight words “I’ and “can”.  They are learning lots in kindergarten!
Mrs. George’s grade one English class is adding and subtracting to 12. They are all learning about Advent which starts this Sunday. They are excited that the seeds they planted last week have sprouted! The star of the week is Kylee.
Mme. Ryan’s grade two and three French Immersion class is started their adding and subtracting unit in math. The students have been really happy about all the snow. They are making snowman pictures with oil pastels.
Ms. Bursey’s grade two English class is making winter artwork this week. They are learning about liquids and solids in science class and doing addition and subtraction problems.
Mme. King’s grade four, five and six French Immersion class is finishing their oral presentations this week. All classes are working on their new math units.
Ms. Williams’s grade three class learned about persuasive writing and had a lot of fun writing convincing arguments and presenting them to the class. In math, they had a test on numeration.
Mrs. Hink’s grade four class started a new unit in science class. They are excited about all the things they are learning about light. Their sound instruments were very creative.
Mr. Ryley’s grade five class has been preparing their simple machines and powered mechanisms kits in preparation for their STEM project.
Mrs. McCarthy’s grade six class has started a new strategy unit on inferring. They are reading a book called “Iqbal” and learning about child slavery in Pakistan.
Mr. Drew Nadon’s grade seven and eight class has started their unit on data management units in math. In social studies, they are working on their history of Christmas project.
Mr. Hancock’s grade nine to level three class had an awesome trip to St. John’s for the Skills Challenge. Students are busy preparing for the Christmas concert. Writing 2203 students are writing narrative essays. Science 1206 students are naming ionic compounds.
Coming Up


Our school Christmas concert will take place on Thursday evening in our school gym at 7:00 pm. Tickets are $5 at the door. 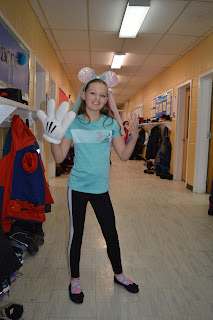 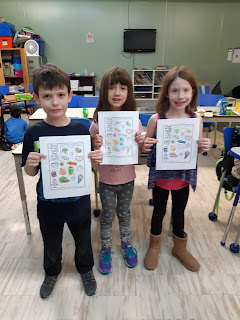 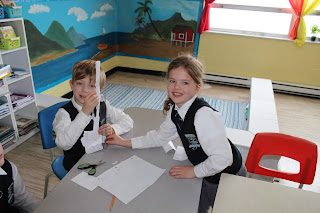 Grade three students, Zackery Burden and Oliver Carey MacDonald, are working together to build a strong tower in science class.
Posted by IHMS at 3:35 AM

By: Sommer Lawrence, Israela Ngania, Jake Morey, Ava Hodder, and Grace Brake-Higgins
We would like to congratulate Gabriel Rowsell, Candace Johannesen, and Charlotte Mercier who represented our school on Tuesday evening at the YMC Peace Week Speak-Off. Charlotte Mercier was declared the overall winner.
The grade 6 to Level 1 students departed on Thursday morning for the Intermediate Skills Challenge in St. John’s. On Friday, they will visit the Basilica for mass, Axtion, and the MUN Aqua Arena. The completion will take place on Saturday at the College of the North Atlantic.
Stars of the Week
Congratulations to Lysea Njinang who received an awesome award for Front Round House Kick from Bennett’s Tae Kwon Do.
Class News
The junior kindergarten classes are learning about healthy living. They are enjoying the snow on the playground and learning about the letter “g” and the number “7”.
Ms. Cornick’s Kindergarten class is learning new letters every week. This week is “h” and “b”. Eric Carle is a fascinating and creative artist and author. They love learning about him.
Mrs. George’s grade one English class is learning about their senses in science class. They are learning the difference between needs and wants in social studies. They were excited to fill 78 boxes for Operation Christmas Child with the help of the entire school.
Mme. Ryan’s grade two and three French Immersion class is reviewing winter words, did a reading comprehension activity on winter with a focus on answering questions with well stated answers. They are also talking about healthy friendships and including everyone.
Ms. Bursey’s grade two English class is learning about numbers to 100 in math and matter in science.
Mme. King’s grade four, five and six French Immersion class would like to congratulate Charlotte Mercier who won the YMCA Peace Week Speak Off on Tuesday night.  The grade four and five students would like to wish the grade six students the best of luck in the Intermediate Skills Challenge this weekend. Everyone is starting a new math unit this week.
Ms. Williams’s grade three class studied French vocabulary relating to “la salle de classes”. Through song and games they learned French names of classroom objects, rooms in the school, and other words relating to school and the classroom.
Mrs. Hink’s grade four class started a new novel study on the Canada Geese Quilt. This is an interesting novel that teaches them about geese, quilts, constellations, and especially the importance of family.
Mr. Ryley’s grade five class is enjoying their research project on Nubia. They are also looking forward to starting their weather forecasts.
Mrs. McCarthy’s grade six class presented speeches this week for the YMCA Peace Week Speak Off. The theme was: Build Community. Act for Peace. They are very excited to attend the Intermediate Skills Challenge this weekend in St. John’s.
Mr. Drew Nadon’s grade seven and eight class have been working very hard to prepare for the annual Skills Challenge and Lego Robotics Competition in St. John’s this weekend.
Mr. Hancock’s grade nine to level three class is wishing good luck to the grade 7-9 students in the Intermediate Skills Challenge this weekend. The grade 10 students are also travelling with the group and will do tours and activities in St. John’s on Saturday.
Coming Up
The Knights of Columbus 50/50 draw and merchandise Bingo will take place this Sunday at 2:00 pm. 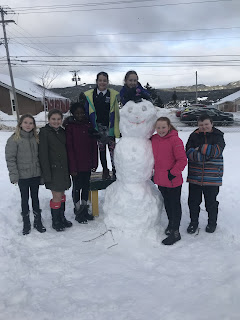 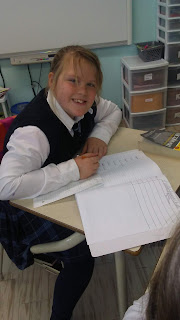 Mallory Chambers works on her novel study in Mrs. Hink's language arts class.
Posted by IHMS at 3:40 AM