By: Maitham Al-Zubaidy, Molly George, Kate Murphy, Israela Ngania
This week we continued the IHMS salad bar on Tuesday. It was another huge success!
Our junior and senior bands, junior kindergarten and kindergarten choir, primary choir, elementary choir, and chamber choir performed in the Rotary Music Festival this week. All of our students performed exceptionally well. We would like to thank Ms. Alteen for working with all the groups and to Thomas Moerschell for accompanying the choirs on piano.
Stars of the Week
Congratulations to Keira Clarke who placed first in Class 267-B Traditional Folk Song Solo – Any Voice – 12 and under and second in Class 389 Girls’ Solo – 12 and under; Luke Coleman who placed second in Class 652 RCM Piano Level 3 – Not over 13 – Romantic and Modern, and second in Class 105-B Musical Theatre Movie Musical, Any voice – 10 and under; Teresa Coleman who placed second in Class 270 Traditional Folk Song Solo, Any Voice – 9 and under; Lily Smallwood who placed first in Class 118-A Musical Theatre / Movie Musical, Duet, Any voices – 12 and under, and first place in Class 105-B Musical Theatre / Movie Musical, any voice – 10 and under; and Thomas Moerschell who placed first in Class 536 Piano Solo – 16 and under – Classical.
Class News
The junior kindergarten classes are learning more about spring this week. They were excited to be a part of the music festival with the kindergarten class.
Ms. Cornick’s Kindergarten class is participated in the music festival this week. They did an awesome job! The students had their kindergarten graduation photos taken this week.
Mrs. George’s grade one English class went on a structure hunt in science class this week. They are really loving their geometry unit. They sang in the festival yesterday. Congratulations to Nate and Lexi who performed their own pieces in the festival!
Mme. Ryan’s grade two and three French Immersion class is cluing up their research on a francophone country and making posters to display the interesting facts they have learned. They are beginning a unit about the maple sugar harvest in Quebec that surrounds the spring season. The students were very excited to perform in the festival this week.
Ms. Bursey’s grade two English class is learning about how to use commas, plurals, and abbreviations in language arts. They are discussing volunteering in social studies and simple machines in science.
Mme. King’s grade four, five and six French Immersion class has had a busy week with the Rotary Music Festival. In Français, they are doing reading assignments. In math, the grade fours are dividing decimals.
Ms. Williams’ grade three class learned about the positive interactions among people in social studies. Students discussed different interactions they’ve had at school and how to promote more of these kinds of interactions. In health, students continued this theme by learning about the different qualities of a good friend. Students then created their own group skits to show how a person can be a good friend.
Mrs. Hinks’ grade four class wrote pourquoi tales as a class and then presented it to the grade one class. It is called “How the Unicorn Lost Its Horn”. They are researching for the Heritage Fair and learning a lot of amazing facts.
Mr. Ryley’s grade five class has started working on their heritage fair projects. They performed this week in the musical festival with the school band and choir.
Mrs. McCarthy’s grade six class is finished their novel study on Bridge to Terabithia and celebrated by watching the movie and noting the comparisons.
Mr. Drew Nadon’s grade seven and eight class is preparing for a math quiz on ratio rate and percentages. They are excited about the upcoming drama festival next week in Rocky Harbour.
Coming Up


Cardboard box races at Marble Mountain on Saturday. Registration begins at 10 am. 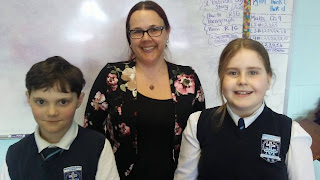 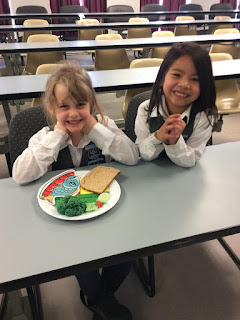 Ciara Bromley and Emma Tran enjoyed the kindergarten hospital orientation this week a the school of nursing.
Posted by IHMS at 3:39 AM