By: Grace Brake Higgins, Israela Ngania, Ava Hodder, Maitham Al-Zubaidy, Molly George, Kate Murphy
On Monday the prayer group led a special service for the May Crowing. Thank you to Mrs. Coleman and the members of the prayer group for a job well done.  We will wear blue ribbons for Mary throughout the month of May.
Golf Professional, Mr. Wayne Allen, visited our gym classes this week to introduce golf and provide lessons to our classes.
Jacob Cull won the City of Corner Brook Mayor For A Day Contest. Leah Lainey, Kate Murphy, and Brooke Watton were selected as councillors to represent our school. Jacob was officially declared Mayor in a special assembly in our school on Wednesday morning. Following the assembly he was escorted to City Hall in a fire truck. Mayor Cull and our councillors participated in a mock city council meeting that evening.
Congratulations to our grade six boys indoor soccer team who went undefeated last weekend and won gold! Thank you to our coaches Mr. Drew Nadon and Mr. Ryley Nadon for their dedication to the team. Thank you to our many parents and volunteers who worked so hard during the tournament.
Mrs. Hink’s grade four class participated in a calendar poster contest for the Epilepsy Association. Heidi Payne’s poster was selected to be features in the 2019-2020 calendar.
We would like to wish good luck to the grade six girls’ soccer team who are participating in a tournament this weekend.
We would like to thank everyone who supported our Apple A Day fundraiser! The last draw took place on Friday.
Class News
The junior kindergarten classes are enjoying some outside play this week. They are making special gifts for their moms for Mother’s Day.
Ms. Cornick’s Kindergarten class has begun a new theme on weather. The children have new words this week as well. The words they are studying a getting longer and longer.
Mrs. George’s grade one English class is busy making Mother’s Day surprises this week. They are enjoying learning different strategies when adding and subtracting. They would like to wish a Happy Mother’s Day to all their moms.
Mme. Ryan’s grade two and three French Immersion class is working on Mother’s Day surprises...shh! They have also been working on a class book about the things that make them unique.
Ms. Bursey’s grade two English class is learning about nouns, verbs, and adjectives. They are working on a special Robert Munsh creative writing project. In math they are working on geometry.
Mme. King’s grade four, five and six French Immersion class is working on a cinquain, a non traditional poetry style. They are also learning the future proche and adverbs of time that require future tense. In math, the students are finishing their units on multiplication and division.
Ms. Williams’ grade three class learned vocabulary for family members in French. In social studies, students discussed ways to be a good citizen. Students also had fun completing posters for a salmon conservation contest.
Mrs. Hinks’ grade four class is soon beginning division in math. They are working hard on their novel studies. They would like to congratulate the members of the grade six boys soccer team on their win this weekend!
Mr. Ryley’s grade five class is very proud of the work they did on their Kids in Charge Energy Contest. In language arts they are reading a book about spiders and discovering many new things they did not already know.
Mrs. McCarthy’s grade six class is reading a book called “Caring for Cheetahs”. They finished their Friends for Life Program this week.
Mr. Drew Nadon’s grade seven and eight class is continuing to work on literature circles in language arts. They competed their Kids In Charge Energy Savings projects this week.
Mr. Hancock’s grade nine to level three class had an awesome trip to the MATE ROV Underwater Robotics Competition in St. John’s last week.
Coming Up


Junior Kindergarten and kindergarten orientation sessions will take place on May 22nd. 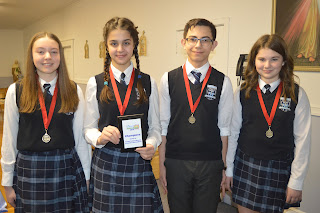 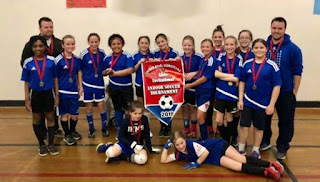 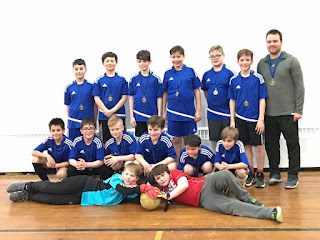